Skip to content
/ Congo (Dem. Rep. of Congo) / Giving from the Heart 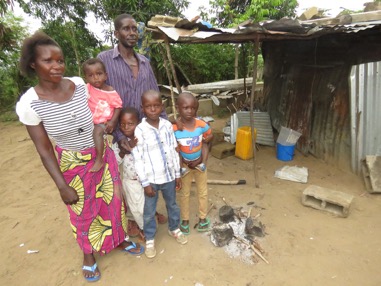 Giving from the Heart

A poor Congolese family learns about Jesus and shares with their community.

The greatest generosity is sometimes seen in the poorest of people. The Bible tells the story of a poor widow who put two mites into the treasury. Jesus said that she gave more than all, because she gave all she had. Th is same spirit of heart-felt sacrifice is moving people to give more than would be expected in our day.

Luzala lives in extreme poverty in the Democratic Republic of the Congo. He is married, and a father to six children. His 15-year-old daughter is pregnant now, and the family lives in a metal, one-room shelter. Because of his poverty Luzala was not able to own his own land until the chief of his community donated a half acre to Luzala’s family.

Luzala had been invited by a local nonprofit organization to attend a six-month training program, where he could learn the trade of building. The purpose of the program was to equip poor people with skills to help them earn a living. After completing it however, Luzala never found enough work to sustain his family. His wife earned a bit of money through manual labor at a few farms, but they did not have enough income to afford to send their children to school.

Luzala’s family belonged to a Congolese traditional religion called, “Shoeless People.” Under this religion, they did not put shoes on their feet because they
believed that Congo was the holy land.

One day in 2017, Luzala’s wife received a visit from a Bible worker. It was her first time to invite a Christian into her home. She was surprised to hear about Jesus. “He is in heaven, preparing a home for those who believe in Him,” the Bible worker said. “Jesus will come back and take His followers with Him to heaven, where there is no sickness, no poverty and no death.”

“I want to know more about Jesus,” she said, and she set up an appointment with him for future Bible studies.

When Luzala came home that day, he was not happy with his wife for having a Bible study with a Christian. To his greater chagrin, she had requested further visits from the Bible worker.

“The man I met today had the good news about a place where there will be no poverty or death,” she explained. “This is why I want to know more about such a place, and how to get there.”

The Bible study plan was to meet once a week with Luzala’s family, but Luzala himself did not listen—until the evening of the fifth week, when he happened
to be at home lying on his bed. Luzala listened as the Bible worker talked about the Sabbath. When Luzala heard that the true Sabbath was not Sunday, but
Saturday, Luzala got up from his bed to ask questions. He had never heard this doctrine before.

One day, Luzala shared a burden on his heart with the Bible worker. “I want the light that I have received to shine in my community,” he said. He had decided to donate half of his land for a shelter to be built on it, so that people could have a safe place to come and learn about Jesus. “I would like to go to heaven,” Luzala
said, “but while I am waiting for Jesus to come and take me home, I would like my humble place to become a station where people gather to learn about Jesus, and wait for Him too.”

Train Them 2 Fish raised funds in Congo to build a shelter at Luzala’s home where 38 adults and 50 kids gather every Sabbath to worship. They call the place, “Waiting Station of Jesus’ Second Coming.” Luzala was baptized along with his wife, their daughter and 23 of their friends. There is a great need for a school so that their children can have an Adventist education.

Train Them 2 Fish has assigned Luzala to the School of Evangelism building project, where he is now working to earn a living. He lives daily by God’s grace. Thank you for your support and prayers for the growth of this small congregation.

Author: Pastor Thomas Ongasa works in the Democratic Republic of Congo. He was formerly the president of the local SDA conference. He believed that God was calling him to start a training school to equip young people to spread the gospel in his country so he founded Train Them 2 Fish.

How You Can Help:
Pray for the Luzala’s family and their community to learn about Jesus and His last warning message.

Donate. Funds are needed to train more Bible Workers to enter areas where the name of Jesus is not known, Bibles for those new to the faith and Spirit of Prophecy books. If you are impressed to help with the work in this disadvantaged country, mark your donation “Congo,” and send to:
Mission Projects International
PO Box 506
Republic, WA 99166-0506