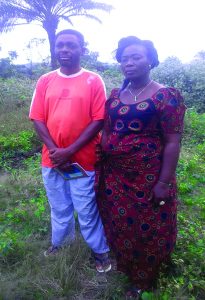 A Miracle from Nowhere

Nobody in Israel would have agreed with Jesus’ decision to recruit fishermen from the middle of nowhere to establish a worldwide movement. Likewise, nobody considered Jean Claude Ngandu, a young man from Kinshasa, Congo, as a candidate for God’s work. As a youth, Ngandu had made some mistakes, and many people no longer trusted him.

Still, Ngandu heard God calling and in 2016, he asked permission from his pastor to attend the 6-week Bible Worker’s training program offered by Train Them 2 Fish. Going back to his local church, he offered his help as a Bible worker—but still nobody would trust him except his pastor, who encouraged him not to give up.

In April 2018, Ngandu visited the free medical clinic operated by Train Them 2 Fish in Kinshasa. “I have a strong feeling that God is calling me to go somewhere and plant a church,” he told us. “Would you give me a chance?”

Knowing of his reputation, we told Ngandu we would consider the request. When he insisted, we called his local pastor for a recommendation. The pastor encouraged us to give Ngandu the chance.

At the end of April, Ngandu was assigned as a church planter to Tshela, a small town 600 kilometers west of Kinshasa, far from the interference of suspicious acquaintances. Taking his six months’ seed fund, Ngandu set off, excited to begin his work. As soon he arrived at Tshela, however, Ngandu faced two major challenges: His wife got sick, and thieves pickpocketed his money. Even so, Ngandu did not give up. Instead, he started building relationships in the community and soon began Bible studies with four young people. To his surprise, he was quickly invited to sign an agreement with the owner of a local radio station to preach the Adventist message every morning and evening. Accepting the offer, Ngandu sent us an appeal for books and sermons to help him create content for the radio program.

As the radio aired Ngandu’s messages, a Pentecostal preacher was touched and decided to look up Ngandu to learn more about the Adventist message. The two became friends, and for one month they studied the Bible every day at the Pentecostal pastor’s home. At the end of their studies, the pastor accepted the Three Angels’ Messages and asked to be baptized along with his wife and 14 people from his church! 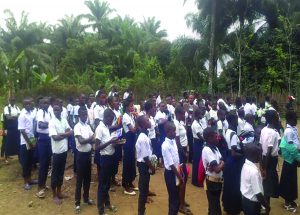 After their baptism, the new believers decided they would no longer send their children to non-Adventist schools, which require Sabbath attendance. Praying over the matter, they asked permission from the chief of the community to start a school where their children would be free to keep the Sabbath. The chief granted permission. Praising God, the Tshela believers began collecting funds to rent a building. Ngandu spoke about the project on the air, and soon 12 young adults presented themselves at the school. They said they had been listening to the radio sermons and that they wanted to join the new church and serve as volunteer teachers at the school.

On Monday, September 12, 2018, the school opened its doors with 450 students. In just four months, God had used Ngandu to establish a congregation with 16 baptized members, 19 people awaiting baptism, and a large primary and secondary school. Pastor Anderson Ilundu, president of the SDA mission for that region, said, “It is nothing else but a miracle from nowhere.” Soon Pastor Ilundu will visit Tshela to conduct a baptism and welcome the new church and school into the worldwide family of the Seventh-day Adventist Church!

Pastor Thomas Ongasa, formerly a conference president in the Congo, founded Train Them 2 Fish in answer to God’s call to equip young people to spread the gospel in his country.

Pray for the Tshela congregation as they look for property to build a school and a church.

Donate. Funds are needed to train more workers and to provide Bibles and Spirit of Prophecy books for new believers. If you are impressed to help with the work in this disadvantaged country, mark your donation “Congo” and send it to:

Thank You. In the first three quarters of 2018, your donations to MPI’s programs in the Congo totaled just over $15,000. These funds supported workers and evangelism, built churches, and provided literature to needy souls! 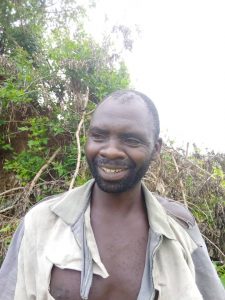 A Home in Jesus

A starving family finds not only work, but hope, with a compassionate stranger.

My family had gone two days without food, and now my children were crying from hunger. We had left our home village to find work in Bushenyi, but the rich man I worked for had been withholding my salary. With a heavy heart, I leaned my head on my wooden staff. “God, why have you decided to let us die now?”

No sooner had I opened my eyes than a strange man walked by. “Why are you sad?” he asked me. When I told him the story, he pointed down the road. “Go to the house next to the jackfruit tree. There is an old woman there who will give you a simple job.”

My wife and I trudged to the house and knocked. A young boy opened the door, and an old, stooped woman came out of the bedroom, leaning on a wooden cane. She smiled as she greeted us.

“I am Nuwagaba Alex and this is my wife,” I began. “We have been directed here for a job. Can you give us work?”

“When did you last eat food?” she interrupted. “You sound like a person speaking from an empty stomach!”

“We last ate two days ago. We are terribly hungry and our three children are starving.”

As the woman ordered her house maid to serve us some food, I thought of my children. “Excuse me,” I asked the maid, “may I have a small bowl to pack some for my children?”

“Worry not,” the old woman said. Reaching toward a pile of books in the corner, she pulled out a Bible in my local dialect and began reading. I did not really pay attention because I kept thinking of my hungry children. After the Bible study, however, the woman asked her maid to bring us two kilograms of maize flour and one kilogram of beans. “Go and cook for your children, and tomorrow I will give you a job,” she said in a tender voice.

My wife and I left feeling lighthearted and happy. Our whole time in this area, we had never met such a merciful, godly person. Everyone else had been hostile, looking out for themselves and not caring for others. Yet this woman had given us food without even asking us to work for it! That night as we cooked and fed our children, my family shared the happiest night we had had in three months. 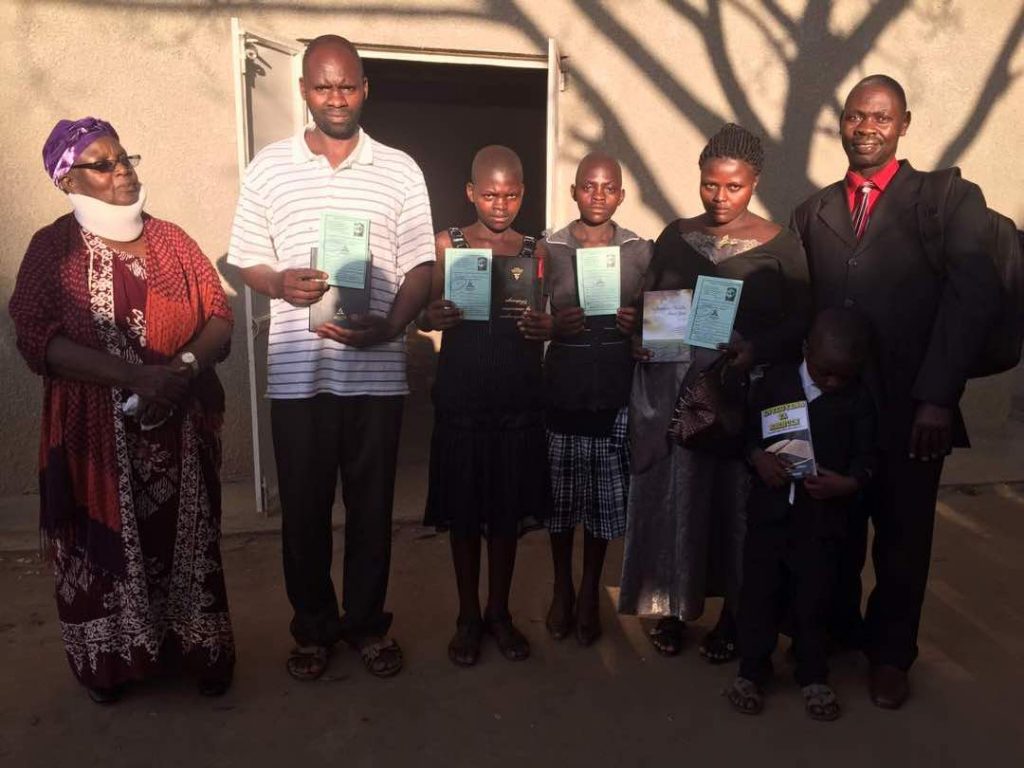 The following day, when I went to work, the woman had another surprise: She gave us a house in the middle of her banana plantation where we could live for free! From this house, we could work in her gardens; and when she had no work for us, she would link us to other people with jobs. We would have work every day, and our pay would be food.

On Friday, the woman visited us and forbade us from working on Sabbath. “Then you are forbidding us from eating on that day as well!” I complained. “Without working, we cannot eat.”

After all her kindness, I shouldn’t have worried. Every Friday, she brought us a bunch of bananas and requested that we come to church. At the Ruhandagazi Church, which is 100 meters from where we stay, we delved into the Bible during Sabbath School. Soon, my wife, our two daughters and I were baptized. Although we own neither land nor a home, we have found a home in Jesus, and we are working and saving to buy land. Pray for us in our new spiritual journey!

This narrative by Nuwagaba Alex was shared with and written by Pastor John Kaganzi. Pastor John is the leader of the Ruhandagazi SDA District in Bushenyi.

Pray for the follow-up evangelistic work that Pastor John is doing to build up Christ’s Kingdom. Pray for funds to build the roof on their new church (approximately $600).

Give a gift to Pastor John’s work. Please mark your donation “Uganda Mission” and send it to:

To give online, visit:
missionspro.org/donate

The last words spoken in the hearing of the disciples are as full of meaning to us as they were to them. “Go therefore and make disciples of all the nations, baptizing them in the name of the Father and the Son and the Holy Spirit, teaching them to observe all things that I have commanded you: and lo, I am with you always, even to the end of the age.” Matthew 28:19, 20, NKJV. “The gospel commission is the great missionary charter of Christ’s kingdom. The disciples were to work earnestly for souls, giving to all the invitation of mercy. They were not to wait for the people to come to them; they were to go to the people with their message.

“The disciples were to carry their work forward in Christ’s name. Their every word and act was to fasten attention on His name, as possessing that vital power by which sinners may be saved. Their faith was to center in Him who is the source of mercy and power. In His name they were to present their petitions to the Father, and they would receive answer. They were to baptize in the name of the Father, the Son, and the Holy Spirit. Christ’s name was to be their watchword, their badge of distinction, their bond of union, the authority for their course of action, and the source of their success. Nothing was to be recognized in His kingdom that did not bear His name and superscription.” Acts of the Apostles, 28.

Jesus said to “go” and make disciples. In some cases, Christ has already made disciples of those seeking the truth, and we simply need to seek them out and encourage them into a deep relationship with the Lord. Recently, Pastor Agamah started visiting seven groups that have formed in the country of Togo, West Africa. These new groups have sprung up because seekers of truth have personally studied the Bible and been convicted on the Biblical teaching of the Sabbath. Without even realizing that there is a worldwide church composed of Sabbath keepers, these believers have been gathering in small shelters on the seventh day to worship God and study the Bible, hoping to find additional light. Many of their doctrines are in line with what we hold as Seventh-day Adventists, and Pastor Agamah has been teaching them about those doctrines which have been obscure and difficult for them to understand. Now that he has spent time reviewing the Three Angels’ Messages with them, a number of individuals among these groups are ready for baptism. It is amazing how God raises up believers where we least expect them!

God is truly working in a marvelous way in Togo. Pastor Agamah is planning to help relocate a trained Bible worker to continue visiting and studying the Bible with these new groups. In addition, Pastor Agamah would like to help them build simple church structures to worship in on God’s holy Sabbath. Please pray for these new groups of believers as they continue to study God’s Word.

May God help us to seek those who are searching!