At Advent Books in England, we often hear stories from people using different witnessing methods to spread the gospel. As a result, The Great Controversy is being distributed far and wide. We have now sent out more than 37,000 The Great Controversy books, including shipments to the Philippines and Zimbabwe. 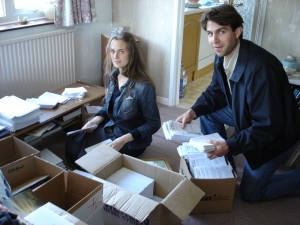 We usually send out bulk mailings of leaflets advertising these books. Using the postal service, we sometimes send out many thousands of leaflets. The postmen deliver these right to people’s doors with their other mail. The most we ever sent out at a time was over 900,000 leaflets. When the requests come back to us, sometimes we get more than 50 of them per day. It’s hard work to send out all the replies. To make things easier, we stuff The Great Controversy and cards advertising the correspondence courses, into padded envelopes. Then all we have to do is pop a personalized letter inside and send it off. Some people purchase cases of the books and give them out themselves, or they can get boxes of leaflets from us and give these out in their areas.

I have been doing door-to-door evangelism, myself, and it’s my goal to reach as many people as possible with this amazing advent message by Ellen White. Here are some testimonies from others who have been distributing these books, like the leaves of autumn: 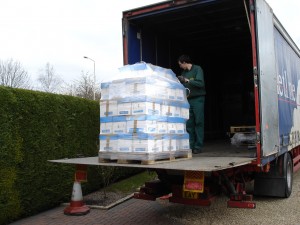 “I gave The Great Controversy to one of the nurses who works at the nursing home where my mum is. In the morning, I had prayed for God to lead me to someone and he led me to [a nurse named] Millie. I had asked her what she thought of the new pope and the conversation went on from there. The next day I brought her The Great Controversy. I didn’t see her for a couple of days and when I did see her she said she had read three chapters. She was excited—went ‘round telling everyone about the book that I had given her. When she asked when I wanted it back, I said that it was hers to keep. She was elated and said that she would pass it on to her family when she finished.” 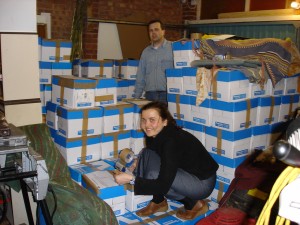 In another incident, a man named Demetrius in Lancashire obtained a copy of The Great Controversy and painted his version of the front cover art. Owners of a nearby art shop, as well as his workplace, had expressed an interest in displaying it. After graduating from university, Demetrius had taken a job at an office where his boss was a Muslim. When he asked for Sabbath privileges, his Muslim boss asked if he was a Jew. Demetrius took this opportunity to share the Bible and The Great Controversy. Now, at his boss’s suggestion, his painting hangs in his office, where his colleagues can see it, as well as clients and customers who come in and out.

A home church in Kenya writes that they received The Great Controversy, as well as the Ten Commandments bookmark. They have found the book to be very interesting and it is being shared at their home church every Sabbath. 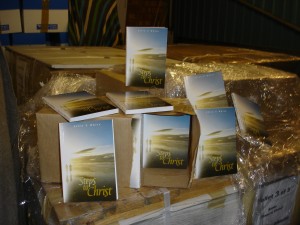 Another woman puts the books into charity (second-hand) shops and carries a book in her bag ready to give to anyone who is interested. Yet another lady, who is wheelchair-bound, doesn’t let her disability stop her—when she sends out supplements from her online store, she inserts a leaflet into each package before they are mailed.

Someone left a leaflet on a bus in Harrow, and two young men picked it up and were interested. They found our phone number and called, requesting two copies of the book and asked if we had any others. I told them about Steps to Christ and they said they wanted that one, too. So all because someone left a leaflet on a bus, two young men will have the opportunity of reading this end-time book.

Recently, my son Jonathan’s grandmother visited us and she shared some of the ways that she spreads the gospel. A lady talked to her in the city and Gran took a Steps to Christ out of her bag and gave it to her. Gran watched as the woman sat on a bench and read the book! 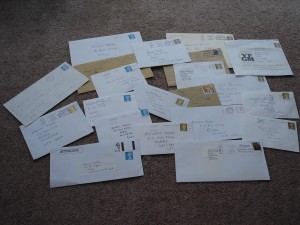 “Thank you ever so much for the opportunity to have my very own copy of the requested book. My friend recommended this book to me, so I am enlightened to read it for myself, and send my gratitude to you for the book.”

“I am a student of [a theology college in Nigeria] and in dire need of books for my study at the college and future ministry. The task ahead for us is a daunting one n the absence of tools to reach [so many people].” We get many requests from this Anglican college and we often wonder where this will lead, since the college trains young men to be in charge of Anglican churches!

One woman already had a copy of The Great Controversy from another source. She wrote: “I have now finished reading the book…and I found that once I picked it up to read it, I couldn’t put it down!” 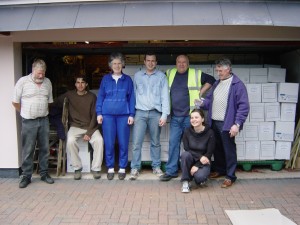 We have now covered 77% of the United Kingdom with literature advertising The Great Controversy. Over 30,000 people have requested it, and more than half of these have also requested correspondence Bible studies. We currently have more bulk mailings scheduled to go out, including one which will send 400,000 leaflets to homes in the Leicestershire area. Even though we have no funds in the bank to cover these bulk mailings, we trust God to provide—and He does. Please pray for the work here at Advent Books, and for the people receiving the leaflets and the books. We want to go home, and we know you do, too.