Homeless But Not Hopeless

Malik from Somalia introduced himself to me as he walked into the hall where we were getting ready for a healthy cooking class that evening. The students organizing the local community event were in full swing, but I had time to talk and so I sat down with Malik.

His was not a standard introduction, like “Hi, I’m John, and I am an accountant.” Instead, his words left me overwhelmed: “My name is Malik. I am from Somalia and am a refugee on the move for the last 15 years.”

Malik was a few years younger than me, in his late twenties. He had left Somalia with his father at a young age, due to the ongoing tensions and instability of the country. They fled to a neighboring country only to be rejected and sent to a refugee camp where guerilla soldiers would come and recruit children to fight for them. Malik decided to flee and began a journey that he never knew would span the next 15 years of his life, eventually bringing him to Germany.

As the evening passed, the story unfolded. From Somalia he had fled to Yemen. Traveling through the desert of Saudi Arabia on a cattle train, he made his way to Syria. From Syria he journeyed through Turkey and eventually crossed the Aegean Sea with a group of people, who, like him, were searching for a better future. Not everyone found it. The boat sank and a number of people died. The Greek coast guard pulled Malik out of the water.

Life in Greece was not easy. There is a huge difference between being a tourist and a refugee in Greece. Malik stayed in Greece for a while, learned the language, got married, and had a daughter. But the journey was not over. Things got very tough and they decided to move on. This time, the journey was mostly by foot. As a family, they made their way to Romania. They used their last money to pay someone to guide them across the border by night. But the person suddenly left them and they had no idea where they were. A taxi driver spotted them and offered to drive them to a nearby city in exchange for the ring on Malik’s wife’s finger.

Homeless and without money or possessions, Malik and his family were put in a refugee home. To pay for their stay, Malik told me he was forced to beg, since he did not have permission to work. One day, as he was out begging, a Turkish businessman approached him. After hearing his story, he took Malik to a bus station where he purchased three tickets from Romania to Germany. That same night they left. Arriving in one of the bigger cities of Germany by evening, Malik and his family spent the night at the train station. The next morning he asked some people for help and was directed to an evangelical church. The church provided help and connected them with the officials. Not long afterwards they were given a home and life seemed at last to settle down.

Their case is still pending and it is uncertain if they can stay in Germany. In the meantime, Malik is learning German and his daughter is going to school. While he is not allowed to officially work, due to his refugee status, he decided to be a volunteer worker at a local retirement home. 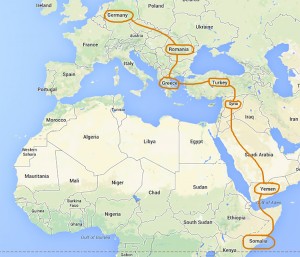 With a smile, he told me that he loves to help other people. Through all the pain and uncertainty, Malik has decided to not lose hope. For 15 years he had been homeless, and at certain times, almost hopeless. Yet there was something that kept him going. Or more correctly—Someone who kept him going.

I will be the first to admit that I find it hard to understand why all this heartache and tragedy seems to be heaped upon one family like this. I know it’s the result of the broken and fractured world in which we live. I know a great controversy is raging between good and evil and that we are caught in the crossfire. I know the origin of evil began with Lucifer, and that the Bible plainly teaches that one day he will be destroyed. Death, sorrow, and pain will be no more. I know the book of Revelation ends with the promise that God Himself will wipe away every tear. Without these revelations and promises, found in scripture, I would not know what to make of Malik’s story. Yet sin with all its devastating results cannot be fully explained, or else it could be excused. To a certain extent, we all can taste the bitter results of a planet in rebellion. Some of us more than others.

The question is: What do we do with our pain? Malik’s story reminds me of another story that took place a long time ago. Joseph was sold as a slave by his own brothers. He was taken to Egypt and worked his way up only to be falsely accused and cast into prison. All odds seemed against him, but he refused to be hopeless. Through a series of miraculous divine interventions, Joseph eventually became second in command of all Egypt. Talk about a turn in the story! To top it off, he meets his brothers who come to Egypt for food because of a great famine. They bow before him, not knowing who he is. He tests his brothers and finds out their hearts have been softened. At last Joseph reveals who he is and his brothers are utterly dismayed. He then says to them: “But now, do not therefore be grieved or angry with yourselves because you sold me here; for God sent me before you to preserve life.” Genesis 45:5. Egypt became the place of refuge for Joseph’s family. Later Joseph adds, “But as for you, you meant evil against me; but God meant it for good, in order to bring it about as it is this day, to save many people alive.” Genesis 50:20.

It is often the end of a story that defines a story! Joseph remained hopeful to the point that he could see God’s overarching plan in the midst of his own life beset with difficulties. He believed these words: “All things work together for good to those who love God, to those who are called according to His purpose.” Romans 8:28. It is more than just a naïve saying. The effects of a broken world can either break us or shape us. Joseph and Malik chose the latter.

Oh, and there is another story. This one makes the other two shrink in comparison. Jesus in the Garden of Gethsemane fell to the ground sweating blood as the sins of the entire world were placed upon him. He bore all the pain, including that of Joseph, Malik, you, and me. The devil sought to crush his life and finally, hanging on the cross, Jesus cried out: “It is finished!” Just as the enemy believed victory was his, he received the deathblow of defeat, which must have been his ultimate frustration. He meant the death of Jesus for evil, but God meant it for good. Jesus was separated from His Father so you and I would never have to be. Reconciliation was made. Victory was won. Sin was defeated in Him! Yes, the war has continued, but the outcome is secured. The tomb is empty. Jesus has risen. This can define the end of your own story as a great one!

It is up to us to believe and embrace this story, to make it ours. I am sure your life has some bumpy chapters and surely there are more to come. The enemy of souls loves to see suffering increase in our lives. He certainly rejoiced to see Malik homeless, but heaven rejoiced to see that Malik was not hopeless. In the end, heaven wins because hope remains! May this be our story!

“Surely goodness and mercy shall follow me all the days of my life; and I will dwell in the house of the Lord forever.” Psalm 23:6.

By Daniel Pel of Living Water Ministry of Norway. See website for correspondence or donations: www.livingwater.no.