“Fatherless and motherless children are thrown into the arms of the church, and Christ says to His followers: Take these destitute children, bring them up for Me, and ye shall receive your wages.” The Adventist Home, 167. 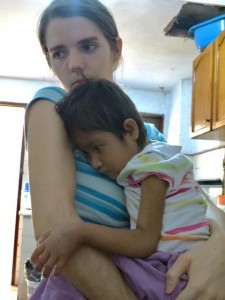 God has really been blessing us here in Santa Cruz, Bolivia! Recently, we were fixing up the house, using donated funds earmarked for maintenance. A group of young people from Brazil came over to help with the painting and brought with them a stroller for Yaneth, which will make it much easier to take her places.

Let me take a minute to introduce you to our littlest patient, six-year-old Yaneth, who came to us from a small town north of us. She was found in the trash where she had been left to die. After a two-week stay in the hospital, she was sent to us because we have much better health care here in the city. We took her for a physical therapy evaluation, and the therapist told us that she reacted to things as if she were a two-month-old. So we have lots of work to do with her. We take her to therapy at least twice a week and we are doing what we can at home with her, as well.

At first, Yaneth was having lots of convulsions and fevers, which are now under control. She came to us weighing only 17 pounds and had to be on a feeding tube. When she started to eat, it took forever because she does not like to open her mouth very wide, and we had to burp her after each meal. It was like having a newborn baby. But now she is eating much better and even wakes us up in the night to eat.

She has a lot of health issues, including heart problems. We have to take her to a specialist who is trying to find out what is wrong with her heart, since it beats very fast. She is also very small for her age and has brain damage that we do not yet know the extent of, as well as other problems. When she got here she could barely move and did not smile, cry, and could not even hold up her own head.

“Divine love makes its most touching appeals when it calls upon us to manifest the same tender compassion that Christ manifested. He was a man of sorrows, and acquainted with grief. In all our afflictions He is afflicted. He loves men and women as the purchase of His own blood, and He says to us, ‘A new commandment I give unto you, That ye love one another; as I have loved you, that ye also love one another.’ Review and Herald, September 13, 1906.

We have learned a little of her history. There was a worker at Familia Feliz, a Bolivian orphanage, who saw Yaneth when she was younger. He said that her parents are gypsies who belong to a native tribe and speak their own dialect. They gave her away to another family for unknown reasons. The adoptive family treated her very badly and made her live with the dogs (the dogs here are very unkempt). She was abused physically and sexually. At that time, she could run and play just like any other five-year-old girl. The worker wanted to adopt her, so he told the Children’s Defense about her, but by the time they were able to do anything the family had already moved away. The next time he saw her was after the Children’s Defense had taken her to the hospital after she had spent five days in the trash,

left to die. She was found unconscious and had lung problems and a very high fever.

About a month after finding her, we heard her cry for the first time. Each new thing was so amazing for us, like her first smile, or the first time she sat up on her own. The first time I bathed her, the water turned brown because she was so dirty.

Yaneth now weighs 22 pounds and can stand up while holding on to something, and she can even walk a little, with help. She now cries, smiles and laughs. She loves to cuddle and be hugged and kissed. She is such a sweetheart!

Her parents came to sign off Yaneth, so we could care for her, and they asked if they could also give us her four-year-old brother who was also in very poor health and also underweight. He came to us about a month ago, also weighing 17 pounds and is now 22 pounds like his sister, and is doing well.

I feel very blessed to be able to take care of them. We are all very happy with Yaneth’s improvements, though the road ahead is long and hard. Please pray for her full recovery, and if you would like to help cover some of her medical costs please send your gifts of love. Thank you so much for your prayers and support of my work here in Bolivia.