Greetings from Senegal! Thank God for His goodness and mercy. The last time I wrote, I was hoping to buy a car after approximately five months of riding public transportation. I am happy to share with you that I was able to purchase a 1999 Daihatsu Rocky, a small 4×4. The school I worked for didn’t pay their faculty until after all of the classes were completed. At the time, it seemed like a difficult thing and it did get a bit sticky, but God brought me through. After taking out my tithe and offering, I had just enough to buy the car. Praise God!

Four days later, after an afternoon visit from some of my students, I started feeling sick. I heated water, completed a hot and cold contrast bath, and went to bed. The next day, I was unable to get out of bed except to go to the toilet. Fortunately, Jean, one of the nurses from the Adventist clinic in Niaguis, had come the day before to spend his vacation with us. The diagnosis: dysentery! The next several days were challenging, to say the least, but by God’s grace, I made it through. With the help of prayer, charcoal, and hot fomentation to the abdomen, I was back on my feet in a few days. I was very wobbly for several days, but I could move around. Later, I took some goldenseal and an electrolyte mix. I lost quite a bit of weight but I have since put most of it back on. I thank God for our health message and for His provision for sending a nurse to me at the right time.

A few weeks later my youngest daughter Janie also started experiencing the same symptoms, but not as severe. After recuperating, she then developed the typical symptoms of malaria—headache, joint pain, and fever. We used charcoal, local herbs, and fomentation, but the headaches persisted. Since I am a massage therapist, I decided to check for trigger points and hypertonic muscles, and found a few. We massaged them and the headaches stopped. She took a malaria test that came out negative, but she was still feeling tired and listless. After further investigation, we discovered that she was also anemic. We put her on a regimen of B-12 and a liquid iron/vitamin compound. Now she feels much better.

This period was a bit difficult for us but we both learned a lot about the diagnosis and healing processes. We also learned, to a greater extent, the importance of trusting God with whatever comes, without fear. During this time, we discussed what death means to the Christian and faced the fact that tomorrow is not promised to anyone. This also allowed us to talk about how God will put some people to sleep whom He knows will be unable to face the coming time of trouble. Because my daughter is very sensitive, I was hesitant to raise the issue of death, but God strengthened us both and she understands that whether we live or die, we must do so in Jesus.

Otherwise, life in Senegal continues with its ups and downs, but God constantly opens doors for me to witness to His children here. I have always talked with my students about my religious beliefs and the Bible, but now it seems that He is sending me to individuals that are searching for Him. Recently, I was called to work with Christine, a French woman. After a couple of classes, I learned that her daughter had a rare disease that may eventually cause her to lose her vision and hearing. I asked Christine if she prayed. Like the average French person, she said no. She told me that her parents had never prayed or talked about God. When I asked her if I could pray for her and her daughter she said that she wouldn’t mind. Another day, we spent the entire class time talking about God’s love and I was able to share with her what God had done for me. Afterwards, I gave her Steps to Christ in French. A couple of weeks later a former student called, wanting to take more classes. Although he is a Muslim, he has on several occasions spoken about Jesus.

We all want to see people come to church and become baptized. I would love to see that here in Senegal. However, in this Muslim environment, where family and community ties are so strong and people who change religions are ostracized and even brutalized, I have come to understand that I am only a sower of seeds. I scatter the seeds, but it is the Holy Spirit that waters and fertilizes.

I may not see the fruit of my labor here, but I trust God that every individual who is sincerely searching for Him will find Him. In John 10:27 Jesus says: “My sheep hear my voice, and I know them, and they follow me.” The Spirit of Prophecy tells us that when the loud cry goes forth, those sincere souls who had heard the message, but were held back by family ties, will break loose and join God’s people. My prayer is that those with whom I share the gospel will make the right decision when the time comes.

As for the outpost, we are coming along with our construction and our garden. Thanks to faithful brethren and Mission Projects International we are finishing the bathroom and kitchen for our Elijah rooms. These rooms are available for newly converted brethren, guests, or workers like Pierre, a young brother from the Ziguinchor church in Casamance who came last month to help us with the garden and odd jobs. He will also be doing some literature evangelism in the village. We are hoping that Pierre will help us increase the productivity of our garden and develop plans to market the produce. 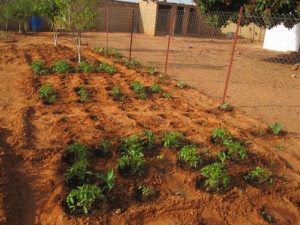 We are working hard to build up the soil and are experimenting with different crops. Several of the mango trees we planted are blossoming and we hope to get our first mangoes this year. We also planted cotton last year and it has been producing. We have put in tomatoes, kale, arugula, corn, and cucumbers. The insects and birds damaged a few things last season, such as the bok choy and the eggplants, but we are trying some different products for the pests. We are using organic methods, but the pests here are very aggressive. In a couple of weeks we will add some chickens to the garden so that they can help us with the pests.

Please continue to pray that the water pipe installation will come quickly. We were told a month ago that it should come within the next couple of months so we are waiting and praying. It would be a blessing to many families here who currently buy water from the water pipe in the village. We live in what used to be the outskirts of the village but neighbors are being added steadily. We buy water from donkey carts and the cost of hauling the water is more than the cost of the water itself.

Thank you for your prayers and your support. The work is not as dramatic here as in some places, but I know that the Holy Spirit is moving on the hearts of people and God will have a harvest here. May God bless and keep us all and strengthen us to remain faithful no matter what. Maranatha!

By Deborah Ndione. Email: senegalhealthproject@live.com. Support for this work can be sent through Mission Projects International, PO Box 59656, Renton, WA 98058.