No Electricity, No Problem!

“It is a joyous work to open the Scriptures to others.” Testimonies for the Church, vol. 9, 118. “Bring earnestness and fervency into your prayers, and into your Bible readings, and into your preaching, that you may leave the impression that the sacred truths you are presenting to others are to you a living reality. Whatever you do for Jesus, seek with all your powers to do it with earnestness. Never feel that you have attained to the highest point, and can therefore rise no higher…. Set your mind to task, that you may present the truth in a manner to interest them. Seize the most interesting portions of Scripture that you can bring before them, come right to the point, and seek to fasten their attention, and instruct them in the ways of the Lord.” Christian Service, 144.

My report takes place in the region of Lamcade, which is in the municipality of Lake Sebu in the province of South Cotabato in the Philippines. The Lord helped us to discover the need of the people in this area. There is a Sabbath-keeping church there, but the people who live near it say that only five people still actively worship there every Sabbath. I asked them why there are only a few left and they told me that their church has not been nurtured properly and does not have steady leadership. It hurt to hear that, so I attended their church soon after and presented the Three Angels’ Messages. The people were not prejudiced against the message but were interested and willing to hear the truth, and I thanked the Lord for that.

The church members told us that we are welcome to come every Sabbath and preach to them. So we conducted house-to-house Bible studies, visited the backsliders, and conducted a public crusade. God touched the hearts of the backsliders because they all came back and now worship God every Sabbath. As several weeks went by, many of our Bible students from Sunday-keeping churches began to observe the Sabbath and have become church members themselves. 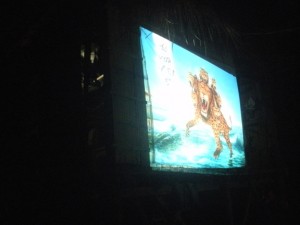 As the work continued, trials came to the little church, but our brethren have stood strong in their faith. Another church demanded that they join them and came and tore down the little church and removed all the materials. This did not stop the church in Lamcade, they continue to meet in homes. They pray that someday they will have their own church building again, in which to worship God. But the Lord is a wonderful provider and He encouraged brothers and sisters in America to send funds through Mission Projects International for a church building! As of now, the building is under construction, but it is finished enough that the church members already worship in it. The brothers and sisters of Lamcade are very thankful from their hearts for your support and the blessing they received.

Since we are still working in Lamcade, my wife and small son and I are staying in the town of Sitio T’wol, which is about six kilometers (about four miles) from Lamcade. We journeyed there on a motorcycle. When we reached the barangay (village) of Lamdalag, we left our motorcycle at the home of Brother Langgong and then walked the final two kilometers (a little over a mile). Because we had a lot of things to bring with us, I could not do it on my own, so Langgong’s family helped us carry everything. During this time the weather was poor and my family and I stayed in the church while it rained outside. When the rain stopped, we proceeded to Sitio T’wol, which is only a short distance away. We stayed in Brother Rudy’s home at night and preached in their courtyard by day.

Because the Philippines does not have a lot of electricity, some places are required to have a rotating brownout. I did not expect that the brownout in Sitio T’wol would be between 6:00 pm to 10:00 pm. I thought we would not be able to continue our work because people would want to go to bed by the time the brownout was over each evening. We went to bed early, since there was not much else we could do in the dark, but then Brother Rudy called. I had a difficult time understanding him because he speaks a different dialect, so he repeated himself in my dialect. He said that many people were waiting outside for the meetings! I was very surprised because they had a long wait for the electricity to come back on in order for them to hear the gospel of God, but as soon as it came on we preached until midnight.

After a week of preaching in Sitio T’wol, we invited the listeners to attend worship on Saturday. On Sabbath, God touched the hearts of the people who had been coming each night, most of whom are from a local Sunday-keeping church. As the Lord’s work expands, I hope to use a generator in order to preach in different villages that also have no electricity during the brownout. There are many more places that thirst for the truth, especially in the mountain areas. A generator would be a big help for the evangelism for these people, and it would cost about 10,000 pesos (about $222 US).

Because of your help in funding our evangelism, many more souls have received the truth and follow the footsteps of our Savior Jesus Christ. In addition to our work in Lamcade, we added 21 souls via baptism, as a result of Bible study and public preaching. We still study church doctrine with them. I was very thankful for the support that you have provided, and especially for the prayers that this work will continue to expand and more souls will decide to follow the footsteps of the Lord.

I am currently in Impasug-ong Bukidnon, and one of the local families used to be involved in the Knights of Columbus but is now very supportive of our work for God. They converted to the Seventh-day Adventist church during a visit by Pastors Cody Francis and Mike Bauler of Mission Projects International. The pastors held a public crusade and are very supportive of the work here, especially the training school and the churches of Impasug-ong and Lafortuna. As we convert to the truth we become colaborers with Christ through help and support.

“A great work can be done by presenting to the people the Bible just as it reads. Carry the word of God to every mans door, urge it’s plain statements upon every mans conscience, repeat to all the Saviour’s command, ‘search the Scriptures.’ Admonish them to take the Bible as it is, to implore divine enlightenment, and then, when the light shines, to gladly accept each precious ray and fearlessly abide the consequences.” Testimonies for the Church, vol. 5, 388.

By Temtem Piedraverde. Support for the work in the Philippines can be sent to Mission Projects International, PO Box 59656, Renton, WA 98058.