A Mission Field Near You

Reading articles and seeing photos of missionary work in developing nations is inspiring, but we can’t show you pictures of our mission field! This limitation, however, doesn’t make it any less of a mission field. In fact, Jesus mentioned this particular place by name in Matthew 25:36. He told us that ministering to the group in these walls is the same as ministering to Him. 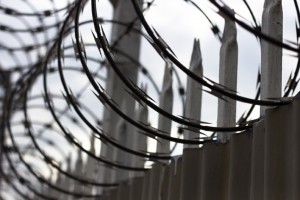 What is our mission? Prison ministry. So instead of viewing photos, use your sanctified imagination to glimpse the blessings to be experienced in this unique and important mission field.

Just over two years ago I learned of a Seventh-day Adventist religious program that had been started at a maximum security facility about two hours south of us. The original volunteer group could no longer oversee the meetings, but the prison administrators had agreed for the inmates to continue holding services even without the leadership of outside volunteers. After speaking with prison officials, I got a group approved to meet with these prisoners twice a month.

On our first visit to this facility, we discovered a group of about 50 inmates who referred to themselves as non-denominational, and scarcely even resembled a religious group. They spent their worship singing and performing for each other, without much reverence.

Needless to say, the prisoners didn’t actually want our help. In fact, the inmate leader came right out and told us, “We have this service just the way we like it.” It took some urging before he would even allow me to share a brief testimony about my own experience of spending ten years in prison. This changed the inmates’ attitudes somewhat, as they realized that I have seen life through their eyes. Still, it was obvious this situation would require much prayer and guidance from above.

Over these last two years my group and I have waited patiently for our turn to speak, listened uncritically to the musical performances and just tried to be friends with the inmates. Ever so slowly, our patience has paid off. Their song service is now much shorter and significantly more reverent, and they are now very open to our messages. Of course, some who attended only for the jam session have left, but others have come to take their places. We now have the largest attendance of any religious group at this prison, sometimes topping 100; and the volunteer coordinator recently asked us if we could begin coming every week. Praise God!

A few months ago, one of our evangelists, Brother Brian, gave an excellent presentation on the Sabbath. One of the inmate leaders we’ll call “Ray” stood up at the end of the message and declared that this sermon was trash, that the Sabbath was Sunday, and that nothing Brian said was true. Ray is about 300 pounds of muscle, which made his passionate, angry declarations somewhat intimidating. Attempting a rebuttal would have been futile in that heated moment, so we were quite happy that it was time to leave anyway. On our way home, we discussed the problem, wondering how much fallout Ray’s outburst might cause among the group. We were glad the Holy Spirit would have time to work on Ray’s heart before we returned. You can be sure we made the whole matter a special subject of prayer!

At our next meeting, we felt delighted to see Ray and all the others return. We were especially relieved when Ray sat quietly and paid close attention. About two months passed. Then one day Ray met us at the door. With a spirit of true repentance, he apologized for his tirade. He expressed that since his offense was public, he wanted to apologize publicly; so we agreed to call him up to the microphone during the meeting.

After song service, Ray made his way to the front and began to speak in a slow, subdued voice. “You all remember my remarks after Brother Brian talked about the change of the Sabbath a few weeks back,” he began. “Well, I’ve been studying this thing out since then, and it’s true.” His voice grew stronger. “These men know their Bibles, and history, too!” Looking in our direction, he finished with a heartfelt apology and added, “These men can be trusted.” Praise God!

Since that time Brother Brian has accepted a call to Minnesota and is already getting involved in prison ministry there. Although we miss him, with much prayer we have been able to recruit several new and capable volunteers. Recently while I was waiting at the prison for this new group of recruits to complete their required training, I struck up a conversation with a gentleman who was there as an observer from the Department of Corrections headquarters. He was aware of all the different religious volunteer groups throughout most of the state, and inquired which denomination I was associated with. When I responded that I am a Seventh-day Adventist, his face lit up. He told me that our services were making a more positive impact on the inmates than those of any other group, and he was very happy to hear that we are now conducting weekly services at this prison. Unlike most other groups, who teach that confession brings justification and grace forgives everything after that, we teach that after justification comes sanctification: a daily process of seeking and following God’s will. This includes a turning away from sin, which changes the inmates’ behavior in a way the prison personnel can see!

From the beginning of this ministry, we saw that many inmates did not have their own personal Bibles. Yes, the prisons do provide Bibles, but they are like library books shared by all. Inmates need their own personal Bibles if they are going to study and grow in grace. What’s more, a friend or relative cannot bring or mail a Bible to an inmate in a state correctional facility. Instead, the Department of Corrections requires that books of any kind must be new, and must be mailed directly from a publisher or bookstore.

The need for Bibles led us to establish a spin-off ministry we call Bibles 4 Prisoners. At first, we provided Bibles to just the inmates who attended our services. Then some were transferred to other prisons and shared our information with inmates there, and we started receiving requests from farther away. The word kept spreading, until now we are receiving requests from faraway states. We operate this endeavor on donations only, providing a quality King James Verson Bible to any inmate in the continental United States who requests one. We really believe God ordained this ministry, because we always have just enough funds to fill the requests that come in. While this is somewhat nerve racking, it is also faith building!

Recently, as the demands for Bibles have been increasing, it’s become clear that God wants this ministry to grow! That’s why we’re thankful that Mission Projects International has selected Bibles 4 Prisoners for this quarter’s 13th Sabbath offering. With your help, we can provide even more prisoners with the bread of life.

The vast majority of inmates will someday return to the public. They could become your neighbors! Would that be good news? It certainly could be if they have become followers of Christ! An even better blessing would be to have them for neighbors in the Kingdom of Heaven.

Inmates request Bibles because they are seeking something (they often don’t know what) to fill their emptiness. The Bible is God’s love letter to the sin-sick soul. Won’t you help us provide lost and weary souls with the wonderful words of life?

By John Carmouche. bibles4prisoners@outlook.com. To support the work of Bibles 4 Prisoners, visit www.bibles4prisoners.com. This quarter, you may also send a donation to Mission Projects International, marked “13th Sabbath offering.”