Thousands of truth-filled pieces of literature were distributed during the pope’s visit to Sweden.

On October 31 and November 1, 2016, the pope visited the cities of Lund and Malmö in Sweden. Ahead of time, we had mailed our booklet 2017 – 500 Years After Luther to all the households in Lund. We also spent time in early spring handing the booklets out on the streets.

On October 23, we presented an evangelistic meeting on the topic of the Antichrist to an interested audience in Lund. Three days later we hit the streets again to hand out our booklet along with The Great Controversy. We had to return home before the pope’s arrival, but before leaving, we rendezvoused with two representatives from a party of 50 who had come from 12 countries including Colombia, South Africa, the United States, Greece, the Netherlands and others to pass out 2017 – 500 Years After Luther, The Great Controversy and a DVD one of the group leaders had produced.

The team focused their efforts on Malmö, the larger of the two Swedish cities. Monday, October 31, 10,000 people gathered in an indoor arena in Malmö to watch on a big screen the papal appearance at the Lund Cathedral where an ecumenical meeting was being held. At the conclusion of the event, our team stood ready to distribute the materials.

Police officers standing near the arena exits inspected the contents of our team’s boxes and without a word returned to their positions close behind the distributors of truth. Instead of being a hindrance, the officers provided protection and even tacit promotion: Since the police did not protest, neither did the public. In fact, the people willingly accepted the booklets, books and DVDs. Some came and asked, “May I have one, too?” Even some nuns took the resources, saying, “May we have some extra copies for the other nuns?” Indeed, the booklets, books and DVDs were virtually torn from the hands of the missionaries, so that by the time 20 minutes had passed, the materials had all been handed out. Nearly everyone received at least one of the items, and some wanted all three. Surely God had a hand in this!

The following day the pope arrived in Malmö, and about 17,000 gathered inside the Malmö Arena to hear him speak. As the crowd disbursed, our distributors once more went to work. Once again, almost everyone accepted without protest. Altogether, the group handed out some 2,400 Swedish copies of The Great Controversy as well as 1,500 English ones, 8,000 copies of 2017 – 500 Years After Luther and 12,000 DVDs. With the truth now in their hands, these people shall have the opportunity to evaluate and make up their minds.

In the back of each copy of 2017 – 500 Years After Luther, information is provided on how to request The Great Controversy. Two or three days after the papal visit, orders started pouring in from professors, theologians, psychologists and others. One Catholic wrote saying he wanted the book for his brother. Another person said her father had read this book during his lifetime, and now that she had read our booklet, she wished to study it, too. Others stated that the booklet was so interesting they wanted to know more. Requests came in for weeks!

During the two days the pope spent in Sweden, the Catholic Church and the Lutheran Church signed a joint declaration stating their purpose to accept a common path. May God use the literature to warn the people of the danger of joining “all the world” in wondering after the beast. Revelation 13:3. 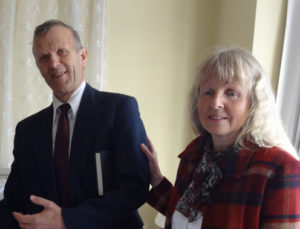 “I was given instruction that as we approach the end, there will be large gatherings in our cities, . . . and that preparations must be made to present the truth at these gatherings. . . .

“We should improve every such opportunity as that presented by the St. Louis Fair. At all such gatherings there should be present men whom God can use. Leaflets containing the light of present truth should be scattered among the people like the leaves of autumn. To many who attend these gatherings these leaflets would be as the leaves of the tree of life, which are for the healing of the nations.” Evangelism, 35, 36.

For help getting started with literature distribution, or to join a preplanned trip, visit www.glowmissiontrips.org.