Conversion of a Sheikh

When you think of Ethiopia, what do you imagine: a Christian nation or a Muslim state? Sadly, although Orthodoxy is still a major religious group here in Ethiopia, the Islamic religion is gaining ground. In some parts of the land, Muslims dominate. 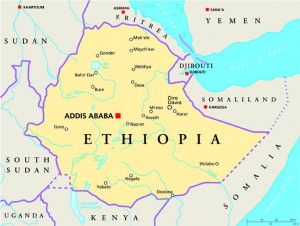 Tahir Aliye was born in Handode, a Muslim-dominated area of Ethiopia, and grew up in a Muslim family. At an early age, he was sent to the region of Bale to learn the Qur’an. This religious training took him 12 years. Next, he was sent to the government school for elementary education, and then to junior secondary school and senior secondary school (grades 11 and 12). Finally, he joined Alage Technical and Vocational Education and Training Center and studied for two years, until health problems forced him to discontinue his studies.

Unfortunately, Tahir quarreled with a girl and ended up in a legal battle with her relatives. In 2008, he was taken to prison in the town of Assela. Here in this prison, he joined a music club and started to compose and sing secular songs. He became so prolific that he actually released seven music albums while in prison! At the same time, he participated in various shows and worked in different positions within the penal system.

During this time, an evangelical gospel worker made friends with Tahir. After six months of camaraderie, they started to discuss Biblical truths. Soon the discussions became hot debates, with Tahir quoting the Qur’an and his friend quoting from the Holy Bible. They debated many issues including the miraculous virgin birth of Jesus, Christ’s work of redemption, His death and resurrection, etc. In time, Tahir came to accept the truth that Jesus Christ is the Savior, Healer, and true God who can set human beings free from demonic oppression. He began to realize the truth of the text, “As I live, saith the Lord, every knee shall bow to Me, and every tongue shall confess to God.” Romans 14:11. As a result of the truths he learned, he gave his life to Jesus and accepted Him as his Savior.

Soon Tahir decided to visit the Ethiopian Evangelical Church, Meserete Kristos, in the prison. However, when he entered the church for the first time, the church members saw his long Muslim robe and recognized him as a sheikh. Thinking he had come to do something against them, they started to rebuke him. Tahir responded by telling them that he had come to church to look for Jesus. Still distrustful of a chief Muslim sheikh, the believers asked him if he wanted to repent. When Tahir confessed that he did indeed desire repentance, the congregation softened. They gave him a copy of the New Testament, and the chief evangelical gospel worker in prison arranged to give Tahir Bible studies.

Tahir remained in prison two years. On January 18, 2009, the evangelical church held a baptism for 345 souls—including Tahir. In 2010, he was released from prison.

Sadly, when Tahir’s family heard of his conversion from Islam to Christianity, they persecuted him and determined to kill him before he marred the Islamic religion. Out of fear, Tahir fled to a rural area and hired on as a servant in a home near the Ethiopian Evangelical Church, Mekane Eyesus. There he attended church during his stay in that rural area.

After working for one year, Tahir received his wages and went to a nearby town called Eteya—another place dominated by Islam. At the Eteya Evangelical Church, he met a young lady named Habtam Dergu, and soon the two were married. Also in Eteya, he met a Seventh-day Adventist gospel worker and began discussing Seventh-day Adventist beliefs with him. Tahir already knew about the Biblical Sabbath from the Qur’an, so he was able to agree to the truth of the seventh-day Sabbath quickly. One at a time, Tahir and the gospel worker discussed the other fundamental Adventist beliefs. At length, Tahir decided to follow the truth as revealed in the Scriptures and to leave aside the teachings of men.

This young sheikh turned Christian is an eloquent speaker with mastery of four languages: Amharic, Oromiffa, English and Arabic. Already, he has grown to be an interesting preacher. I believe that Tahir will be an asset to our country in fulfilling the great commission our Lord entrusted to us. Especially can he help win our Muslim brothers and sisters!

Although a bricklayer by trade, Tahir has been sharing the truth he has received with many. He never keeps silent when he meets people. What a blessing it is to work with this motivated Christian!

By Tesfaye Tadese, instructor in the Theology Department at Ethiopia Adventist College. If you have been touched by the testimony of Tahir and would like to help sponsor him for theology studies so he can be equipped for the ministry, contact tesfayetadese97@yahoo.com. To support the work in Ethiopia, send your donation to Mission Projects International, PO Box 59656, Renton, WA 98058, marked “Ethiopia.” To donate online, visit www.missionspro.org.