The Advancing Work in Senegal.

“A Salaam Aleikum!” Greetings from Senegal!

We are still here moving forward slowly but surely. Life in Senegal this year has been very interesting. We have witnessed severe power cuts, demonstrations against the cuts and a very volatile political discussion. But on the other hand, we have also seen the hand of the Lord bringing Muslims to our churches and opening their hearts to know more about the good news. 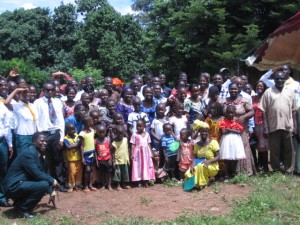 Abdoulaye Doukoure, a middle-aged Muslim man, was baptized into the Pointe E Seventh-day Adventist Church in June of 2011 after hearing some radio programs here in Senegal. The messages he heard touched his heart, and he set out to find the church that was responsible for them. Walking one day in Dakar, he saw the Senegal Seventh-day Adventist Mission office and realized that this was the church he was looking for. Entering the compound, he met Pastor Aliou Ba, and they arranged for Pastor Ba to come to his home outside of Dakar to do Bible studies, which resulted in his baptism on the thirteenth Sabbath.

However, as with most Muslims who convert to Christianity, things have not been easy for him. His wife has threatened to leave, and there has been much turmoil in the family. After hearing about his situation through Pastor Ba, I approached him about helping with the Senegal Health Project. He agreed to come and talk with me, and it seems that he will be a valuable addition to the project. He has experience in agriculture as well as skills as a handy man, which is something that we desperately need.

Doukoure is praying that eventually his family will see the light and follow him. However, things got so bad that he has had to leave the family home due to all of the tension. He has come to work for the Senegal Health Project and has taken a room in the neighboring village. We would like to construct two more buildings on the property where a room can be provided for him and others like him. Please pray for Doukoure and his family, that the peace of God will reign in their midst and that they may all come to the understanding of the saving grace of Jesus Christ. 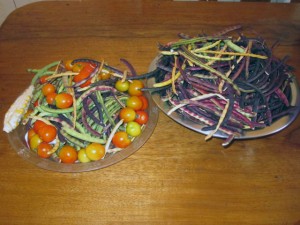 A small part of bean and tomato harvest.

Converting from Islam is very difficult here in Senegal as in other Muslim countries. Individuals are shunned by their families and can even be killed. I have heard of other cases here where people are convinced of the truthfulness of the message, but because of family pressure, they will not take a stand. Due to cultural and economic realities, families live together here. Unemployment is high, and young people cannot afford to live on their own. One young man’s father told him that if he ever changed his religion, he would kill him.

An issue that we have been confronting this year is the unreliability of power. Things were so bad for a while that we were only able to have power for an hour or two a day. Other neighborhoods were going days without power. The people eventually got fed up and demonstrated in the streets. Roads were blocked with burning tires, and Senelec (the power company) buildings were attacked along with other government buildings. Frustration levels were running high for several weeks. Thankfully, things have quieted down now that the power cuts are substantially reduced, but people are still unhappy about the high cost of living and the present government. 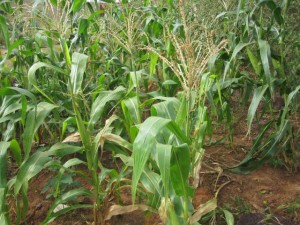 Part of our cornfield.

This situation has really confirmed the necessity of having solar energy. Sometimes the power will turn on and off several times during the day, and it wreaks havoc on appliances. We recently acquired a used generator that we will use to pump water into the reservoirs and to provide power when we have meetings. Gasoline is about $7 a gallon here, so it is not an option for full-time power. Otherwise, we will continue to use candles at night until we are able to purchase a solar energy system.

We had a nice, though small, harvest of corn, tomatoes and beans with the help of the Lord and Doukoure. We are still struggling with the water situation. We need a deep water well, and by God’s grace, we pray that we will get it this coming year. We buy water from the standpipe, which is then delivered by donkey cart. This water can now be pumped into the reservoir using our generator and pump. This is an improvement over our previous system; before we had to climb the ladder and empty the jugs by hand. This was time-consuming and even a bit dangerous; once a worker fell from the ladder onto the awning. We are thankful that he was not hurt, but the awning was broken. 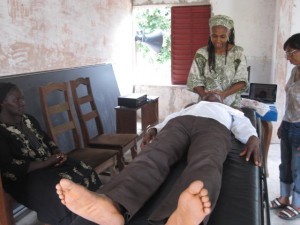 Deborah giving a massage at the camp meeting in Niaguis.

In August, I traveled to Tambacounda to visit my mother-in-law. It is very hot in the dry season, life is very hard, and there is a lot of suffering among the poor. Still, the people are friendly. It is also very hard for older people who do not have children. If they do not have someone to care for them in their old age, they must continue to struggle to find their daily bread because there is no Social Security here. I met two such ladies while there. Both had suffered foot injuries—one while tending to her business of selling herbs collected in the bush and the other while walking.

When they came to my mother-in-law’s home, they were both in considerable pain. A thorn had stuck one on her foot, and the wound had become infected. I put a charcoal poultice on it and gave instructions on what to do every day. The next day the other one came. She had twisted her ankle several days earlier and it was hurting and swollen. I did hot and cold foot baths and massaged her foot, also giving her instructions for continued treatment.

In September, I went to Casamance in the southern part of Senegal for a camp meeting in the village of Niaguis. Brethren came from Kolda, Sedhiou, Zinguinchor, Dakar and Gambia. Sadly, the delegation from Guinea Bissau was unable to come after a dispute at the border. 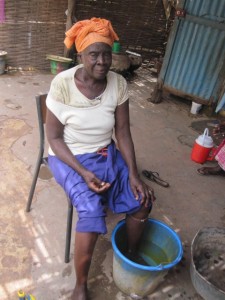 Sira, the lady with a twisted ankle, getting a hydrotherapy treatment in Tambacounda.

I presented three workshops: Our Health Message, Hydrotherapy and Massage. The brethren were very interested in the practical information shared in the hydrotherapy and massage seminars, and we even had the opportunity to treat some of the Muslim brothers and sisters in attendance. Several people asked for massages, among them one young man who had fallen from a three-story building about two years earlier and another young girl who had fallen and hurt her hip sometime in the previous year. Thank the Lord for His mercy and simple remedies! We massaged and did hydrotherapy and shared a lot of information about healthful living. Many people were blessed, including me.

Even though the enemy is working hard to close people’s minds, the Lord is opening their minds. Right before I left for Casamance, I went to see a chef du quartier (neighborhood chief) to get some paperwork, and we started talking about religion. He asked many questions about the Bible and even about the concept of the Godhead. When I asked him if I could bring him some literature, he readily said yes. He is a retired diplomat, and it was clear that he had a keen mind. I took him books after I returned from Casamance and will visit him soon to continue our discussion.

Each day is a blessing and a struggle. God has really been working with and for us, and I am truly grateful. Two weeks ago, as I was traveling from Dakar to Mbirdiam, the brakes failed on my car. I stopped at a gas station, but they could not repair the brakes, so I had to continue my trip with impaired brakes. On the return trip, a young man fell off the back of a local transport into the path of my car. I was driving very slowly because of the state of the brakes and I was able to slow a bit and drive around him. I thank God for His mercy and protection for the young man and me!

There is so much work to be done. Please pray for the Senegal Mission, the churches and their members, the Senegal Health Project and the work here. In February 2012, elections will be held. It will be hotly contested, and many think that there might be some trouble. Pray that God will continue to hold the winds of strife so that the work here can advance by His grace. May God bless and keep you all!