A small church puts Spirit of Prophecy counsel into practice and raises money for the mission field.
You could feel the anticipation in the air. The question on every church member’s mind was, “How much money did we raise?”
Our pastor had recently returned from a mission trip to the Philippines. While there, he met a little girl with a cleft lip whose family was so poor they couldn’t afford the $500 surgery to repair it. He also met a little boy who had a urinary problem that needed medical attention. Medical care is much cheaper in the Philippines than in the United States, but not cheap enough for these poor families.

Our pastor’s pictures of a cute little girl in need really pulled on our heart strings. But what could our little church do? Most of our members are caught up in very busy lives—and we live in a very high cost of living area. Several members operate on a limited income—with constant demands for fuel, food, rent, health care, insurance and the like. Like many in affluent societies, they struggle to make ends meet. 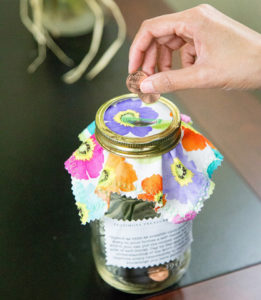 The Spirit of Prophecy gave the answer as to how we could help: “Spend as little as possible upon yourselves. Keep in your homes a self-denial box into which you can put the money saved by little acts of self-denial.” Testimonies, vol. 9, 131. Could a few dollars and cents saved here and there on a meal out or a pack of gum make much difference? We decided to try. For a month our church made a concerted effort to put to practice the inspired counsel.

One member spent hours sewing the edges of cloth tops from unused material, cutting a hole for the money to go through,  and pasting quotes on the outside of canning jars. At church about 25-30 jars were distributed. We set our goal at $1,500.
The whole church caught the spirit and joy of giving and earning money to sacrifice. Here are a few ways that church members gave to the cause:

•    One member returned a comforter set she received as a gift.
•    Another member gave up her birthday dinner at a restaurant and stayed home to eat.
•    Our Bible worker’s wife knit scarves and sold them.
•    The children gave generously from gift and chore money.
•    A member had the idea to give some money from a tax return.
•    One sister put all her change from purchases into the jar, whether bills or coins.
•    People gave up snack purchases.
•    One home increased their planned giving for the month by 1%.
•    Members shared the project with friends and family, and they contributed too. 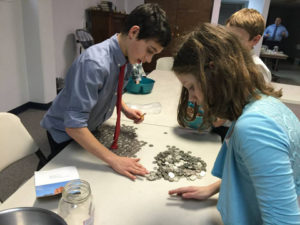 Were we able to raise enough money? After fellowship dinner, we emptied the jars and kids and adults counted and counted and counted. It took quite a long time to count all the coins—especially the pennies! When all had been counted, we were thrilled to find we had far surpassed our $1,500 goal. The total count was $4,203.63!

The little girl’s surgery cost more than expected, but since we overshot our goal, we were able to cover it all. Two children’s lives were changed for the better, but they weren’t the only ones to benefit. Our church learned the joy of giving, of sacrificing for others.

We challenge you to try a self-denial campaign in your church. It’s a win-win for members and missions.

Tips for making a successful church self-denial campaign:
Choose a mission project—if possible, one that is personal to some members.
Prepare jars or boxes to distribute to members.
Give a 5-10 minute talk with photos explaining the project to your church.
Keep the campaign in your church bulletin, and have at least a short announcement made every week.
Generate interest by sharing testimonies and/or ideas via email, social media, announcements, etc.
Set a realistic goal.
Set an end date.
Report the results to the entire church.
Thank everyone who contributed.

Extra! For photos of the little girl with a cleft lip, visit www.missionpro.org/a-mothers-prayer/.