Outside the capital of Senegal, an outpost ministry welcomes 49 children to a Christian day-camp. 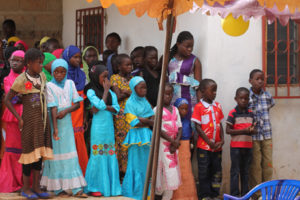 The rainy season has arrived again in Senegal. The farmers welcome it but many residents do not because of the accompanying problems of flooding, traffic issues and building collapses. When walls and roofs cave in, people sometimes die. My daughter’s family’s home fell in, but the Lord kept everyone safe. I can only praise God!

Last August, we held a 5-day Vacation Camp for children ages 8–14 in the village of Mbirdiam, where we have our outpost center. For any activity in the village, you need the approval of the chef du village. Thus, a week before the camp I visited the chief and explained our plans to hold a children’s camp to do arts and crafts, teach some songs and talk about the values of honesty, integrity and obedience to God and parents. We also would have activities for the mothers. Because of our previous activities in the village, the chief gave us permission without a problem.

To recruit attendees, I printed out invitations for 50 children along with permission forms for the parents to complete. After leaving a few with the chief, I visited several key families, leaving extra invitations for them to share with their neighbors. On opening day we had 36 children—but by the end of the week we  had 49 campers!

Everyone had a wonderful time. Enyde Roger, the director of Children’s Ministries for the Western Sahel Union Mission, facilitated the camp. Using the theme “A Walk Through the Zoo,” she told animal stories and showed how God’s creatures characterize different Biblical values. We also taught the children songs and let them color pictures of the animals in the stories and make handi-crafts such as paper flowers and place mats. To top it off, we had  a daily recreation time as well  as a cool drink.
On Wednesday afternoon we invited the mothers to a workshop on making liquid soap and on Thursday afternoon we held a seminar on physical, environmental and mental hygiene. Thirty-two women attended!

For Sabbath afternoon, we invited the families to a mini-concert and display of the children’s crafts. Our church’s children’s choir would sing with the children from Mbirdiam, the campers would receive certificates of attendance and the mothers would be given their bottles of soap. That morning, however, clouds threatened to spoil our plans. During worship it began to rain, and continued off and on throughout lunch. We kept praying that God would stop the rain before the people came—and He did! The sun came out and dried everything out by the time our guests arrived.

About 120 people attended the program, including the chef du village. He thanked us for the camp and asked us to do more activities. After light refreshments, everyone left smiling.

Sister Roger has agreed to facilitate more camps at Mbirdiam throughout the year. Meanwhile, I am raising funds to paint the classrooms in the village school, which looks like it has not been painted in many years. A local paint company has agreed to give a substantial discount. I want to at least repaint the interior of the six classrooms as a community service.

The rain continues to pour outside, reminding us of the storms of life. We are struggling here in the world of sin; but praise the Lord, it will soon be over. We have just a few more years to go. Let’s stand fast through the storms that our Father allows to strengthen our faith!

Deborah Ndione and her
family are missionaries in
Dakar, Senegal.

Pray for the ongoing development projects at the ministry outpost in Mbirdiam. For three years, poor infrastructure has prevented the center from connecting to power and water sources. Please pray for this issue to be resolved so the center of influence can be more useful for future outreach events.

Donate toward ministry needs such as the improvement of the outpost center. Contributions may be made to Mission Projects International, marked “Senegal”.