Three Angels’ Chorale, of Hartland College, travels many miles to minister to hearts old and young.

You sounded like angels,” a concert attendee exclaimed. Really? Didn’t she hear the discordant notes? I mused. We’re not professional; we’re just seeking to glorify God.

Spring break 2016 found the Three Angels’ Chorale en route to Florida. Ten days later, we returned with 3,795 miles, 17 concerts, and many divine appointments behind. You see, our ministry goes beyond simply singing.

It’s about recognizing the hurting heart in the crowd, as Elizabeth, one of our choir members, did. A woman’s scowling face had met her gaze as she glanced out to the audience. “After we were finished singing, I was impressed to talk to her,” Elizabeth shared. Through compassion, Elizabeth’s own testimony and a prayer, the story of a deeply struggling individual cascaded out. God used Elizabeth to show this lady that she did not have to face her challenges alone.

It’s about ministering to people not only through music, but also through testimony and teaching. In North Carolina, we held Sabbath School and a concert for a church of Karen people, ethnic refugees from Myanmar. Even more special was the fact that one of our choir members is Karen herself.

It’s about touching the hearts of young and old, like the little Karen boy who asked, “How can you be a missionary?” and the lovely elderly individuals we ministered to at Fletcher Park Inn in North Carolina. It was there that Taro met Mr. John Thurber, a tenor from the King’s Heralds quartet in the 1960s. We were blessed to share music with those, like him, who had spent years of their lives in ministry.

It’s about encouraging backslidden Christians to seek God once more. Upuia invited her two aunts to a concert we held in South Carolina. Unbeknownst to her, they had a Seventh-day Adventist background, but had drifted away from the church. “One of my aunts said that she probably would have never stepped foot back inside that church, until I invited her to the concert. It’s given her a reason to actually want to go back to that church,” Upuia told me. 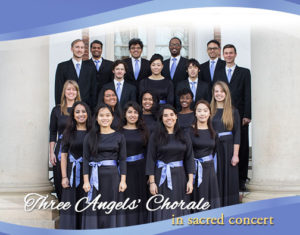 It’s about sparking an interest in the truth through the messages of the songs. Tina had an opportunity to do so when an old high school friend she hadn’t seen in five years showed up at one of our concerts. Her friend saw a different Tina, one whose life had been transformed through a relationship with Jesus. “Since the concert was about God, what Jesus has done for us, and that Jesus is coming again, our conversation that evening was along those lines. We were able to encourage each other a lot,” Tina recalls.

Through it all, we realized that God took our inadequacies and turned them into blessings. We all echo the sentiments expressed by Martin: “One thing which I was able to see was that, however I sang, God was there with us. God blessed those people. I was able to see that God definitely sent His angels to sing with us.” Amen!