“The opinion which prevails in some classes of society, that religion is not conducive to health or to happiness in this life, is one of the most mischievous of errors. The Scripture says: ‘The fear of the Lord tendeth to life; and he that hath it shall abide satisfied.’ Proverbs 19:23.” Christian Education, 67.

“True religion brings man into harmony with the laws of God, physical, mental, and moral. It teaches self-control, serenity, temperance. Religion ennobles the mind, refines the taste, and sanctifies the judgment. It makes the soul a partaker of the purity of heaven. Faith in God’s love and overruling providence lightens the burdens of anxiety and care. It fills the heart with joy and contentment in the highest or the lowliest lot. Religion tends directly to promote health, to lengthen life, and to heighten our enjoyment of all its blessings. It opens to the soul a never-failing fountain of happiness. Would that all who have not chosen Christ might realize that he has something vastly better to offer them than they are seeking for themselves. Man is doing the greatest injury and injustice to his own soul when he thinks and acts contrary to the will of God. No real joy can be found in the path forbidden by him who knows what is best, and who plans for the good of his creatures. The path of transgression leads to misery and destruction; but wisdom’s ‘ways are ways of pleasantness, and all her paths are peace.’ Proverbs 3:17.”  Christian Education, 68

In Impasug-ong, I walk from house to house looking for precious souls with whom I can share God’s wonderful truths 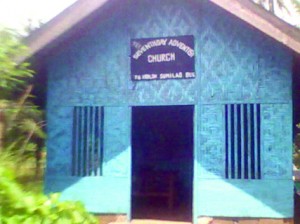 by giving Bible studies to those who are interested. The church here was started through the work of Cody Francis and Mike Bauler. They also made sure that we have a building in which to worship.

We have had many trials, but we know that God never leaves us. As the years and months have passed we have had many souls with whom to share the gospel of Christ. Many helped us in the building of this church.

Each Sabbath the Lord has sent precious souls to worship in this new church building. There are 42 members and 16 children in the children’s division.

Each Sabbath we have a testimony time. At one of these times Brother Joel Luciano and his wife Inday gave a testimony. They have six children. Joel was raised as a Roman Catholic and was a member of the Armed Forces of the Philippines.

Joel tells that when he was a member of the Armed Forces he killed someone who was a member of the Moro-Islamic Liberation Front. Joel heard that the governor of Sultan Kudarat wanted to kill him for what he had done. Joel decided to leave the Armed Forces of the Philippines and move his family to Biwang, Isulan. There he became a layman for the Roman Catholic Church. It was his desire to serve the Lord.

As I was doing house-to-house visits I came to Joel’s home and gave them a pamphlet. I found that he was born in the same place I was—the town of Cotabato. I also discovered as we visited that he had a brother-in-law who had been in the police force. This brother-in-law studied God’s Word and was baptized by Pastor Palange, and he became a Seventh-day Adventist. He followed his convictions and resigned from the police force to serve the Lord. This brother-in-law is living in Cotabato, and I know him. 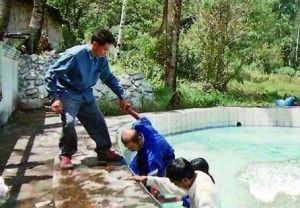 We continued Bible studies with Joel and his family. Each Sabbath we invited them to church. Joel’s wife came to church with their six children. Joel told his wife that he could not go to another church as he would die for his church (Roman Catholic).

We needed to build a parsonage for our pastor, so I asked Joel to help build it as he has carpentry skills. As we worked together building the parsonage, we talk much about the reality of the Bible and he asked me many questions about the Seventh-day Adventist church. He questioned me on the state of the dead and other topics. The Holy Spirit through the Bible helped us answer his many questions.

On the next Sabbath, he was with his family in church. He said that he thought that he could serve God by becoming a layman for the Roman Catholic Church. “All that I have learned while being a layman was a lie,” he said.

He and his family came to church every Sabbath, and we studied with them in their home each night for six months. At a camp meeting in December of 2007 he and all of his family were baptized. We praise the Lord for this.

There was no work for him at Impasug-ong so he and his family moved to Kisolon and the Lord blessed him with work to support his family. He is also an elder for the Kisolon church and is sharing with others.

As Jesus is coming soon, we each need to be busy doing His work of sharing this wonderful message of salvation. “Behold, I come quickly,’ Christ declares; ‘and My reward is with Me, to give every man according as his work shall be.’ Revelation 22: 12. The Lord at His coming will scrutinize every talent; He will demand interest on the capital He has entrusted. By His own humiliation and agony, by His life of toil and His death of shame, Christ has paid for the service of all who have taken His name and profess to be His servants. All are under deepest obligation to improve every capability for the work of winning souls to Him. ‘Ye are not your own,’ He says; ‘for ye are bought with a price;’ therefore glorify God by a life of service that will win men and women from sin to righteousness. 1 Corinthians 6:19, 20. We are bought with the price of Christ’s own life, bought that we may return to God His own in faithful service. We have no time now to give our energies and talents to worldly enterprises. Shall we become absorbed in serving the world, serving ourselves, and lose eternal life and the everlasting bliss of heaven? Oh, we cannot afford to do this! Let every talent be employed in the work of God. Those who receive the truth are, by their efforts, to increase the number of men and women who shall be laborers together with God. Souls are to be enlightened and taught to serve God intelligently; they are to be continually increasing in the knowledge of righteousness. All heaven is interested in the carrying forward of the work that Christ came to the world to do. Heavenly agencies are opening ways for the light of truth to shine to the dark places of the earth. Angels are waiting to communicate to those who will take hold of the work that has been pointed out to us for years. Shall we not manifest an interest to set in operation ways and means for the opening up of city work? Many opportunities have been lost through neglecting to do this work at once, through failing to go forward in faith. The Lord says: ‘Had you exercised faith in the messages I have sent, there would not be such a lack of workers and of means for their support.”  Testimonies, vol. 9, 104, 105.

By Tem Tem Pedraverde. Support for the work in the Philippines can be sent to Mission Projects International, PO Box 59656, Renton, WA 98058.