God protects an Ethiopian convert from a lawsuit  aimed at forcing him to stop preaching truth.

As the chairman of an association of most of the Sunday-worshiping denominations in my district in southern Ethiopia, I used to oppose the efforts of the Seventh-day Adventist workers. But God had other plans for me.

It started when an Adventist evangelist handed me a tract. I told him, “Please don’t give me that useless thing.” Yet in the evening, when I studied my Bible, I picked up the tract and began comparing it with the Scriptures. Soon, I began tuning in to a Seventh-day Adventist radio program. Slowly, God’s truths became clear to me.

One day I sat down with my wife and children and told them that I wanted to become a Seventh-day Adventist. My wife said, “You can’t,” but I went to the church anyway to listen in.

My first Sabbath, the elders asked me if I wanted to join the church. I told them, “I can’t answer you today.” But on my third Sabbath there, I made up my mind. I told the elders, “I am going to preach the gospel with you,” and I asked them to pray for me.
When my wife still couldn’t accept my decision, I told her that I hoped that in time she would agree with me. If not, I would give her all our property and leave. That’s how sure I was that I should become a Seventh-day Adventist.

After this, I talked with my superiors and wrote to the churches in my association to inform them of my new faith. At the next regional gathering, I again announced my decision. The main leader asked me, “Are you leaving because of the low salary?”
I told him that wasn’t the problem, but that I had come to understand that the entire Bible is true. Under his questioning, I tried to explain my new beliefs.

After the conference, the association filed a lawsuit against me, saying I was a false teacher who should be forced to stop preaching. I was summoned to appear before the government administrator. “Why are you causing religious agitations?” he asked. I told him that I didn’t know that what I had done was wrong.

After further interrogation, the administrator advised me not to enter other churches and proselytize. Then he added, “You may witness to people that invite you to their homes, and to individuals. Nobody can stop you from talking about God’s truth.”
After the hearing, I went home and told my wife that the government had given me permission to preach the gospel. Putting our son Samuel between us, I said, “I want our children to grow up according to God’s Word. There is no reason for us each to go our own way.”

The Lord softened my wife’s heart, and she agreed to study with me and allow the children to attend my church. After my family and I studied the Seventh-day Adventist doctrines, we were baptized together. Then we started preaching the gospel. I’ve even shared with my previous church members!

That was in 2014. Since that time, I have been blessed to serve in a number of Seventh-day Adventist churches, even raising up two churches in new places. About eight people have been converted from my old church. Two of the Sunday-keeping evangelists I used to work with have also been converted, and others are still studying.

God has supported me thus far, and has used all my experiences for good. This gospel is feeding me and making me grow. I am sure God will continue leading me. I will follow Him! 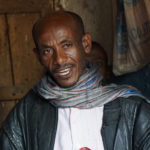 Desta Boke is a gospel worker in southern Ethiopia.

Pray for the Holy Spirit to attend the Ethiopian workers’ labors as they share the Word and seek to establish churches in the mountain villages.

Donate. Many Ethiopian gospel workers must find side jobs to support themselves and their families. Your contributions to Mission Projects International marked “Ethiopia workers” provide for their support and enable them to devote their undivided energy to spreading the everlasting gospel.