From Despair to Hope 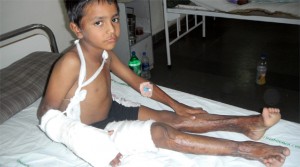 From the time he was a baby, all Shaik Sameer could remember was his parents’ constant fighting. Every day, his mother would faithfully do her duties around their small home: cleaning, cooking, and taking care of his small infant sister. In rural India the tasks of daily living take up the entire day. Water must be hauled from the well and then the food must be cooked, often over an open fire using sticks or cow dung for fuel. Of course the vegetables for the curry have to be purchased each day, as there is no refrigeration. Then the rice has to be cleaned and washed before cooking. The clothes have to be taken to the nearest source of water for washing, either a nearby river, lake, or to the well. Of course they are washed by hand, and then spread on a line, nearby bushes, or grass to dry. With small children in the home, there are many more clothes to wash and furniture and floors to constantly clean, as the babies don’t wear diapers. Often Sameer’s mother would be exhausted by night fall.

His father would return home late from his work, even into the wee hours of the morning. He would often be drunk and a fight would ensue. Little Sameer would cling desperately to his mother’s sari, trying to find solace from the anger of his father. His sister would cry in her sling hung from the rafters of the house. All too often the fists would fly and his mother would receive the brunt of his father’s anger.

It wasn’t long until his mother realized that his father had found another woman. He was happy with her, she was fulfilling his life. This was more than the poor mother could take. What was her life now? Her husband wasn’t interested in her and the children. He didn’t want to give them money for their care. Already she was working hard just to take care of the children, how was she to survive? She felt no hope in life. No one cared. There was only one answer to her problems. Death.

In a desperate fit of crying and internal pain, she poured kerosene over her body from her head down, unaware of the small boy clinging to her legs. With shaky hands, she lit the match. Instantly they were engulfed in flames and fell screaming to the floor as the fire raged on. Neighbors rushed in, grabbed little Sameer, and threw water over him. They managed to save his life, but it was too late for the mother. She had succumbed to the desperate torture of her mind, and the fire had done its work.

Sameer was burned badly on his right hand and his feet, as well as other places where the kerosene had run over his small body. Now left in the care of his poor grandmother, she did all she could for him by taking him to the government hospital. There, by the grace of God, he managed to survive and his burns slowly and painfully healed. Sometimes the smell of rotting flesh was terrible when the nurses changed his bandages. He would cry out in pain as the raw flesh was exposed and wounds cleaned. Life in the hospital was a constant round of pain and boredom. But finally, after several months his flesh began to heal in lumps of scar tissue. The tendons of his right hand and feet were left retracted, pulling his fingers and toes backwards into grotesque and useless positions. There were also large scars on his arms, legs, and back.

Life with their grandmother was better than life on the streets, but her husband was dead, and she was very poor. They managed for food, but life was not easy. Anywhere that Sameer would go people would stare at his handicap, and he learned to hide his face and did not speak freely with others.

It was several years after this that I met Sameer, his sister, and grandmother. He was now a boy of six years. She pled with tears for me to allow him and his sister to join in my school, Rebecca Concept School in the town near where they live. I was happy to allow them, but saddened by the condition of his hand and foot. I determined at that time to somehow help him see a proper surgeon to repair the tissue and make his hand and foot useful again. However, here in India the process is not as easy as that. Anyone with experience here knows that any task can take twice as long as necessary and that is at a minimum. First, I needed to have some idea how much such a surgery would cost so I asked a Surgeon’s Advisor. But just getting him to a doctor was no easy task. His grandmother would ask for help with food and clothes, but getting the money and motivation to go to a doctor was beyond the daily tasks of living. Several times I asked them to take him, but traveling the long distance and attempting to find a specialized surgeon was beyond her knowledge and capabilities.

I was able to find someone to donate some money, but still had not succeeded in getting him to see the proper doctors and surgeon. Finally, after returning to India from my furlough, we got him to see a surgeon. However, we learned that the cost of the surgeries necessary for his hand and feet were way beyond what we received from the sponsor, or what we could raise at this time. Unfortunately, Sameer had no identification proof of any kind, because his mother is dead and his father abandoned them. So because of this he was not eligible for any medical aid from the government.

Over the process of several weeks we worked hard to find a solution to this problem, since they will not do the surgery without having the money or guarantee of the payment. Finally, Das visited the office of the Chief Minister in Hyderabad and was able to get a letter as proof of identification and payment for the surgeries. Now all we have to pay for is travel, food, and medications for the boy. This was a huge answer to prayer and the first surgery was completed recently. The surgery took over ten hours, but praise God it was successful. His right hand is healing in a cast. It is so wonderful to see his fingers straight! After he is healed enough they will do the surgery on his feet.

I am excited and happy to see Sameer get a new chance at life, and I hope that the sorrows of his young life will be engulfed in the joy and happiness of new life and hope in Jesus.