For years the work was stymied, but by God’s grace over 50 people joined the Seventh-day Adventist Church. 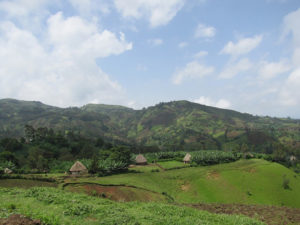 Hadero is a small town nestled in the lush mountains of Southern Ethiopia. A myriad of fruits, vegetables, and other crops flourish in its warm, wet climate. The Omo River cascades over either side of a verdant cliff in the twin Ajora Waterfalls. Tourists come to soak in the magnificent views of the Omo River Gorge and the chains of mixed green mountain ranges that fade into blue in the distance. But sadly, a spiritual darkness has clouded this paradise for many years.

Hadero is home to the biggest market in the region, and the livelihoods of farmers and merchants depend on it. But market day falls on the Sabbath, and is often a stumbling block to church members. It also spreads a negative influence that has kept the outreach efforts of the Seventh-day Adventist Church from bearing much fruit. As a result, God’s work has dwindled there for years. 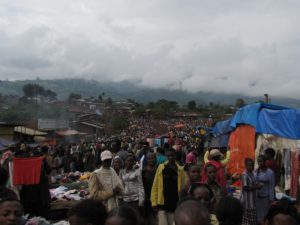 Daniel Shamebo Sabore carries deep a burden for the people of Hadero and he had been praying earnestly that God would bless their efforts and establish a vibrant church there. But nothing ever seemed to stick. Outreach activities were begun, and abandoned. A place of worship was rented, but lack of interest and finances forced it to close.

But in July of 2016, a ray of hope began to glimmer. Pastor Cody Francis, Daniel, and several others traveled to Tunto (5 kilometers west of Hadero) to hold evangelistic meetings. Daniel urged his small team in Hadero to re-open a temporary place of worship, and pray for God to work powerfully. A pathfinder group came from Hawassa to march through Hadero to raise awareness for the meetings. 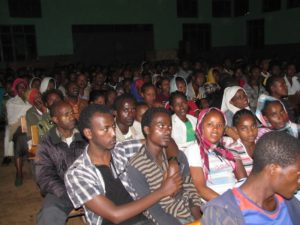 People flocked to the meetings in Tunto, and God’s spirit moved mightily. In the evenings, Pastor Cody and Daniel would return to their lodgings in Hadero, and pray for the town and the surrounding areas. As they poured themselves out day after day, people began to respond.

At the meetings’ close, over 50 people, including many influential people from other denominations, decided to join the Seventh-day Adventist Church. The evangelists wondered and rejoiced that so many souls had come to God in an area where it had been nearly impossible to find even one. Surely the angels had been preaching with them!

Over a year has passed since these souls found Jesus. Unfortunately, due to a lack of financial resources, there is still no house of worship in Hadero. The new converts have reached out to us, asking for help to grow spiritually, and to establish a permanent place of worship for themselves and the new souls they are eager to reach and bring to Jesus. This is what Daniel and many others had been praying for through the many years when there seemed to be no hope for Hadero. If we extend our hearts in prayer, and our hands and resources in help, we can keep the showers of blessing falling on Hadero.

Pray for the gospel workers and lay-people in Ethiopia, that through the work of the Holy Spirit they may continue establishing congregations in the remote villages of their areas.

Support the Ethiopian gospel workers or help build churches for the new congregations by sending your contribution marked “Ethiopia workers” or “Ethiopia churches” to: